In December 2019, Nikon announced that they were leaving the scope market. This sent a massive shock wave through the firearms industry because it was unusual for such a major industry player to simply stop producing scopes.

Even though it is a good few years since the company officially stopped producing scopes, they were such a prolific producer that many are still available for purchase at a number of outlets.

This leads nicely to the question: Have the Nikon M 308 scopes been discontinued? 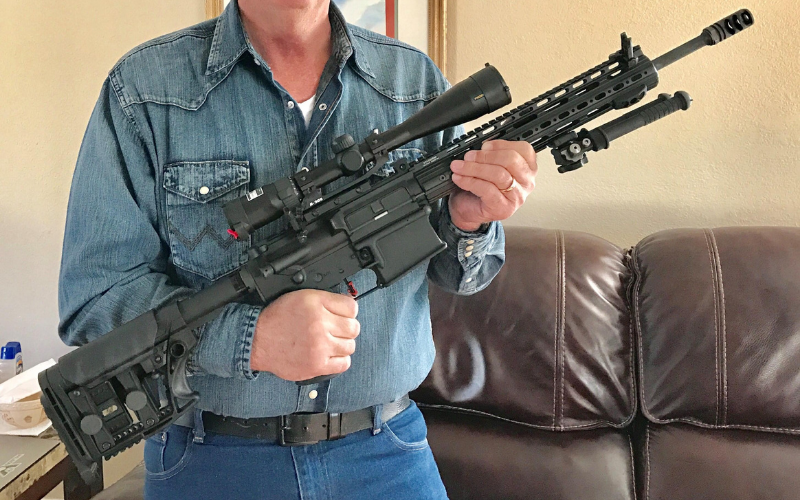 Before I get to that, let me take a second to overview this Nikon scope series.

The M-308 scopes were part of Nikon’s M-Tactical series of scopes. This was introduced as an enhanced version of the company’s very popular P-Tactical scope series.

As you can tell from the name, the M-Tactical scopes were built primarily for tactical-based shooting, although it is also excellent for hunting. It was available as either caliber-specific models for .308 or .223, or alternatively, as a non-specific caliber version.

This was a specifically designed reticle that gave known BDC (bullet drop) functionality to 800 yards, which was shown by the inclusion of “800” in its name. The turret was configured for boat tail .308 bullet or 168-grain hollow point with a muzzle velocity of 2680 feet per second.

This reticle is also compatible with the Nikon Spot on application, and Nikon’s custom turrets. 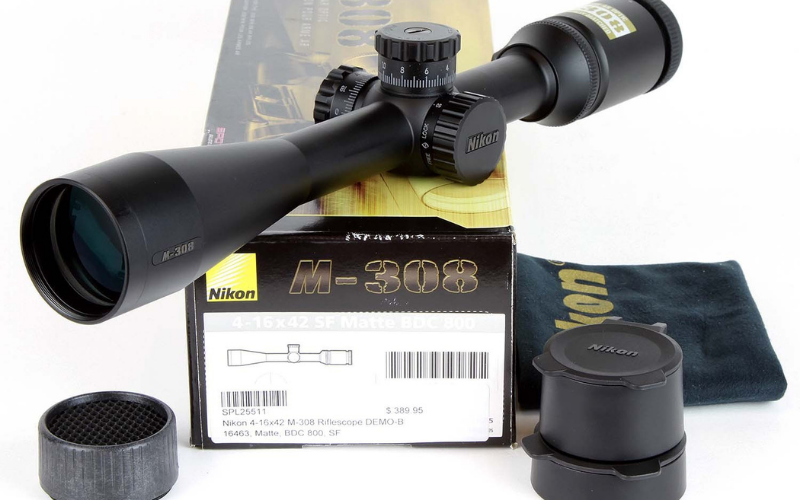 This is the company’s standard duplex crosshair design. It has thicker lines on the outer part of the reticle that get thinner to become fine crosshairs. It’s an excellent choice for general target shooting or hunting but doesn’t excel at long-range targeting.

When released, the scope caught the eye of many AR-10 enthusiasts, making it a very popular choice for the platform.

There were a number of very nice features on the Nikon M-308; these included:

Because the M-Tactical scopes were designed to be an improvement on the Nikon P-Tactical scopes, the optical quality is better. In fact, considering the price, the M 308 scope model has very good quality glass with high resolution and edge to edge clarity.

According to the specifications, it has an eye relief range of between 3.7 and 4 inches. But, to be honest, I don’t think it’s quite that much. In real-world use, I would expect the eye relief to be a maximum of 3.5 inches. Also, it is a bit sensitive. If your head moves from side to side even a little, a black ring will show up at the very edge of the glass. 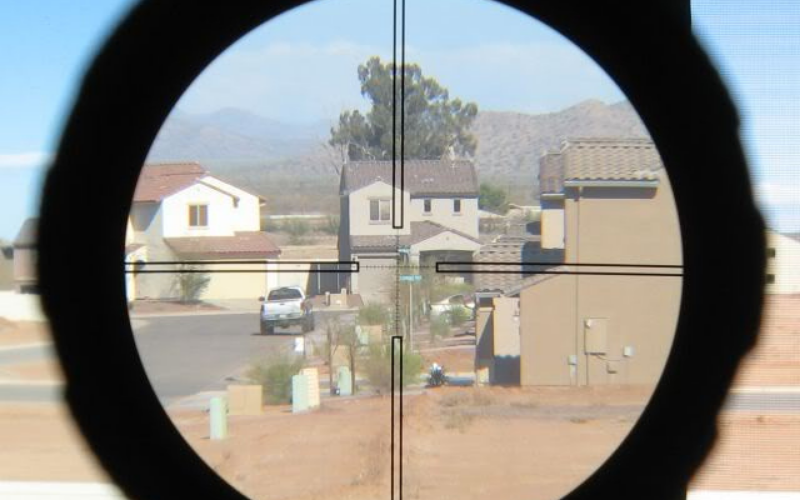 Fair play to Nikon; the zero-reset feature is cleverly thought out and works surprisingly well. It is not a mechanical-based zero rest because of the use of springs to control the reset point. However, it’s rare to get a zero-reset feature of this quality at this price point.

These scopes were covered under one of the two Nikon warranty programs, depending on the date that it was purchased.

If that was before November 1st, 2019, it should be covered by Nikon’s “No Fault” warranty. If it was after the same date, it is covered under their newer “Limited Lifetime Warranty.”

The Limited Lifetime Warranty isn’t quite as customer-friendly as the older No Fault program, but it is in line with the warranty you would get as standard with most European scope brands.

As mentioned above, the eye relief is a little sensitive, which bothers me but not enough to hate the scope.

However, the parallax only goes down to 50 yards, which I personally don’t think is anywhere near enough. It’s fine for long-range shooting and range work but can be a massive liability when hunting. If your target happens to be closer than 50-yards, then, even at the lowest power setting, you will only see a blurry, out of focus image.

And finally, the BDC 800 reticle is only designed for use with a 168 grain .308 bullet that has a muzzle velocity of 2680. Therefore, the BDC functionality will not be of any use if you decide to shoot a bullet that has a different gain weight, or a .308 round that has a faster or slower speed of 2680 FPS.

So, what are the options if you prefer a different .308 bullet because it has better accuracy?

You basically have three…

You can either thoroughly test the BDC functionality using your preferred .308 round and then manually decide on the point of impact of the BDC marks.

Or you could get yourself a custom turret that has been configured specifically for that particular .308 round taking into account the bullet weight, speed, etc. And Nikon does offer an option for custom BDC based turrets through Kenton Turrets.

The final option is to use another application, such as the Nikon Spot-On app. You could then create a cheat sheet that will tell you the BDC circle on the reticle that will make an impact at a particular yardage. 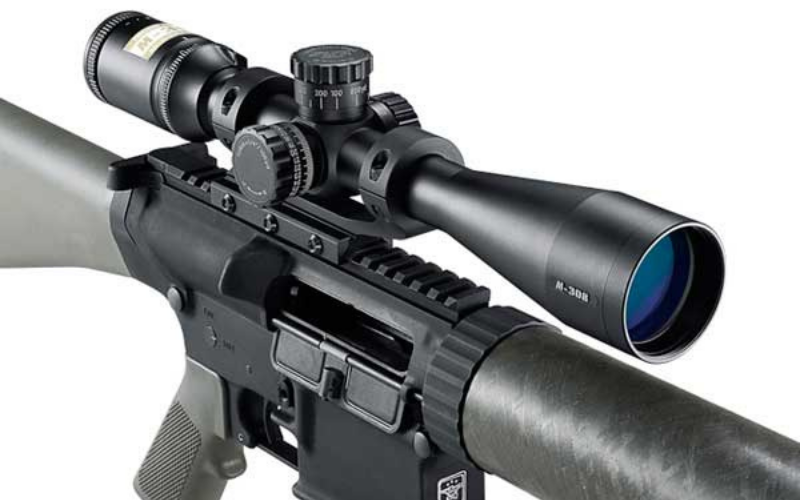 So, Have The Nikon M 308 Scopes Been Discontinued?

Well, the answer is a definite yes. When Nikon moved away from the scope business, they stopped all production of their entire range of riflescopes, including the M-308 scopes.

But, there are some sellers, both online and in physical stores, who still have some new M 308 scopes available. They are getting fewer and fewer by the day because the stock is not being replaced, but you may be lucky and find one.

The other option is to get a second-hand model, although I wouldn’t actually recommend this. Scopes are technical, and depending on how and where the previous owner has used it; it could be more trouble than it’s worth and end up costing you a lot of money for very little gain. Better to stick to a current scope with a quality long-term guarantee, in my opinion.

To finish odd, let’s take a look at some frequently asked questions…

The Nikoplex is a very nice duplex that does not feature any BDC markings, sub tension marks, or hash marks. Therefore, there is no reference point when taking longer distance shoots apart from using the center of the crosshairs (apart from the traditional Kentucky windage technique).

This means that the Nikoplex is better suited to general range work or hunting. However, it is also commonly mounted on AR-10’s that are used for hog hunting.

Some good and bad points

The BDC 800 reticle has several plus points over the Nikoplex, but they only really come into play if you are shooting over longer ranges. Regardless, I’ve used a Nikon scope for hunting that featured a BDC-600 reticle on many occasions, with no issues at all.

But remember that BDC functionality is also very limiting because it ties you to a specific bullet weight and speed. It is difficult and overcomplicated configuring the BDC for any alternative bullet weight or speed, and best avoided, in my opinion. 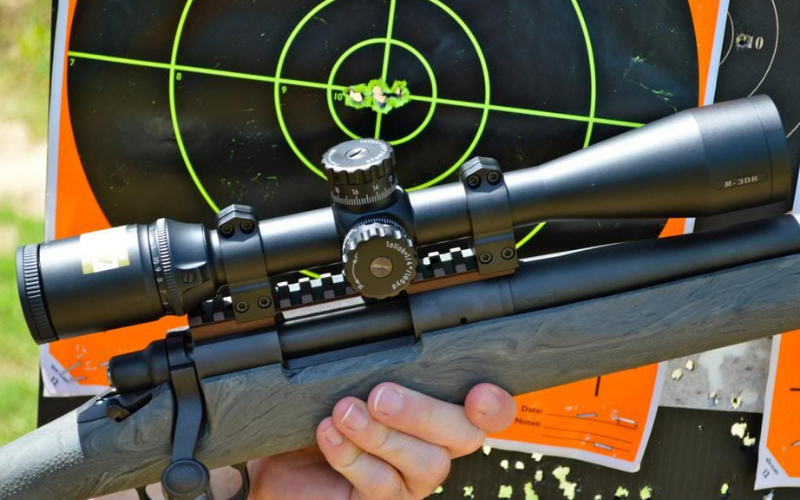 Where were the Nikon M-308 scopes manufactured or made?

As with a number of Nikon’s mid-range scopes, the M-308 scopes were manufactured in the Philippines. In fact, near the time when they got out of the scope market, very few of their scopes were still made in Japan.

Was the Nikon M 308 scope offered with a mil dot reticle?

As far as I know, the Nikon M-308 scopes were never offered with the option of a mil-dot reticle. However, Nikon offered the P3 and the P5 line of scopes dedicated mil-dot reticles.

Both scopes are very similar but do have some differences. So, let’s take a quick look at them…

The optical quality of the M 308 is superior to the P 308 riflescopes. It is not a marked difference, but you would easily notice it if you looked at them side by side. P 308 scopes came with a 4-12x magnification range, whereas the M 308 featured a more powerful magnification range of 4-16x.

The M series scopes all featured a side focus that would go all the way down to 50 yards, whereas the P series had no side focus and featured a fixed parallax set at 100 yards.

These additional features and improvements are the reason the Nikon M 308 scopes had a higher price point than the P series scopes.

Interested in a High-quality Scope Replacement for a Nikon 308?

So, we’ve come to the end of our look at the M 308 from Nikon. It was a good quality scope and set at a reasonable price considering the build and functionality, but sadly, it is no longer with us. And neither are any other Nikon scope for that matter. The company’s days in the firearms industry are now over, and they are concentrating their efforts on the profitable camera, lens, and binocular markets.

They will be missed by a number of loyal shooters who loved their products, but as with everything else, life moves on. So, simply find yourself a quality scope from any of the other quality manufacturers out there (such as the ones in the reviews I have highlighted above), and get back out there and enjoy yourself!

He now spends most of his time at home in Michigan with his wife Nicola and their two bull terriers, Iggy and Joey. He fills up his time by writing as well as doing a lot of volunteering work for local charities. 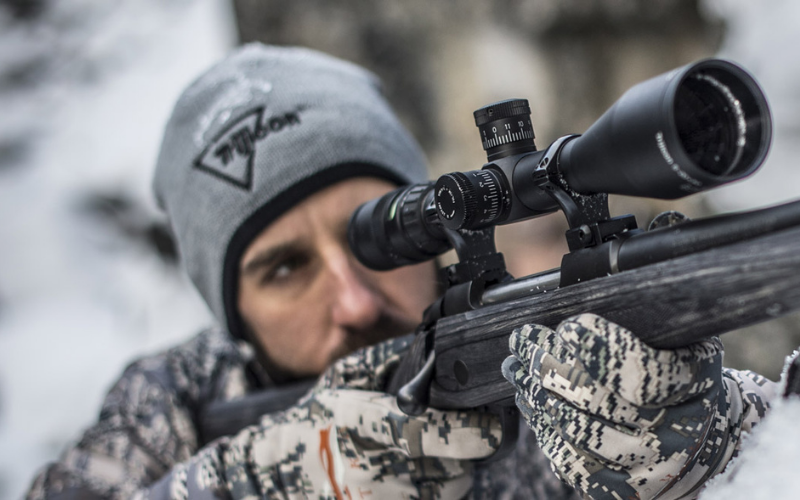 How to Use a Mil Dot Scope for Dummies? 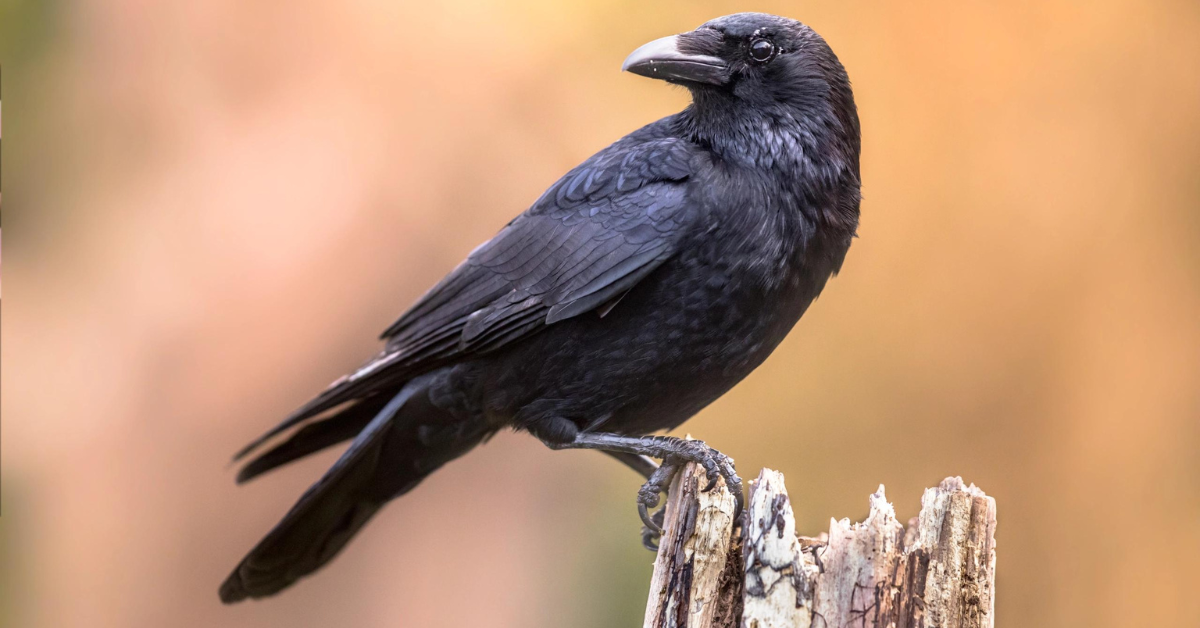 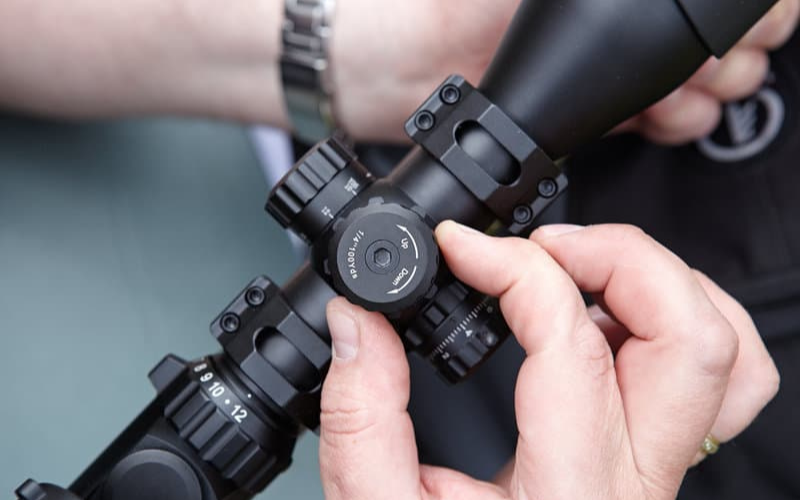 How Do You Adjust a Rifle Scope? 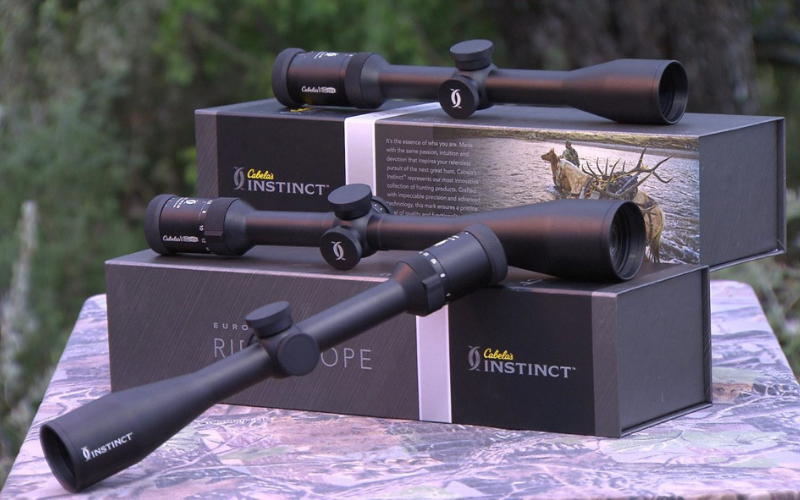 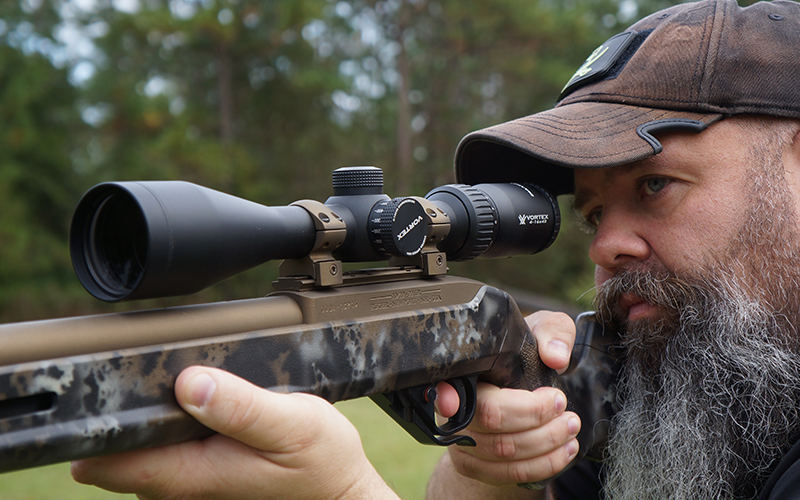 Have The Vortex Diamondback HP Scopes Been Discontinued? 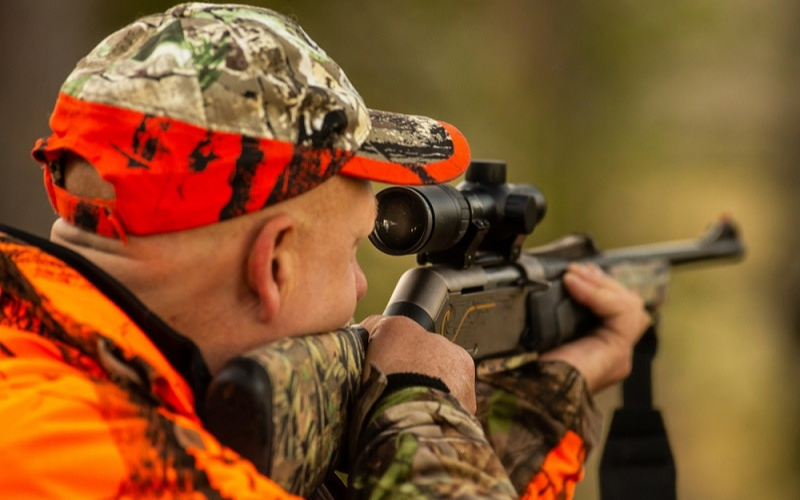 How to Zero a Rifle Scope?